“It’s ten at night, I’m getting ready to go to bed so I check Instagram for a few minutes – and an hour and a half later I find myself buying shoes from this shop based in Seoul called @herenow_shop – they have less than 10k followers, they’re super cute…” Over the phone, Eva Chen, a former Conde Nast editor turned head of fashion partnerships for the social media app Instagram – someone who definitely has more than 10,000 followers –recounts a familiar tale of late-night online shopping. Familiar save for one small detail: it happened on Instagram. Or rather, through it. With no “Buy Me” button, you have to click on an account’s profile link to land on a shopping page – which is an endearingly non-pushy approach that adds a feeling of discovery to proceedings. It’s not reshaping the way we buy clothes, but it is changing the way we’re sold them. Instagram’s head of fashion partnerships, Eva Chen (Getty)
With over 400 million monthly users, Instagram is the eighth largest social networking platform in the world. But in the fashion world, it’s probably number one. Last year the Council of Fashion Designers of America awarded the app its media award, previously bestowed upon journalists and photographers. And arguably, Instagram has shifted more product more directly than any of those. Compared with other social media platforms, the viral nature of Instagram is much more potent in spreading a commercial message when it comes to fashion. A designer doesn’t need a large following to get attention: one Instagram picture – just one of the 80 million posted every day – can be rapidly “re-grammed”, driving users to the original source. If a high-profile Instagrammer (such as the much-followed Chen or the social-media-mogul-model Cara Delevingne, who boasts 29 million followers) feels excited enough to re-gram your product, you could be onto a winner. Hawking a shoe or a handbag off the back of that publicity can quickly equate to big bucks. “The new generation of shoppers are inspired by lifestyle as much as product,” Chen explains, citing Balmain’s Olivier Rousteing, Givenchy’s Riccardo Tisci and Marc Jacobs as examples. “You’re on this journey with them, sure, a very glamorous and cool journey with those guys. And with new young designers, you also get to grow with them.” 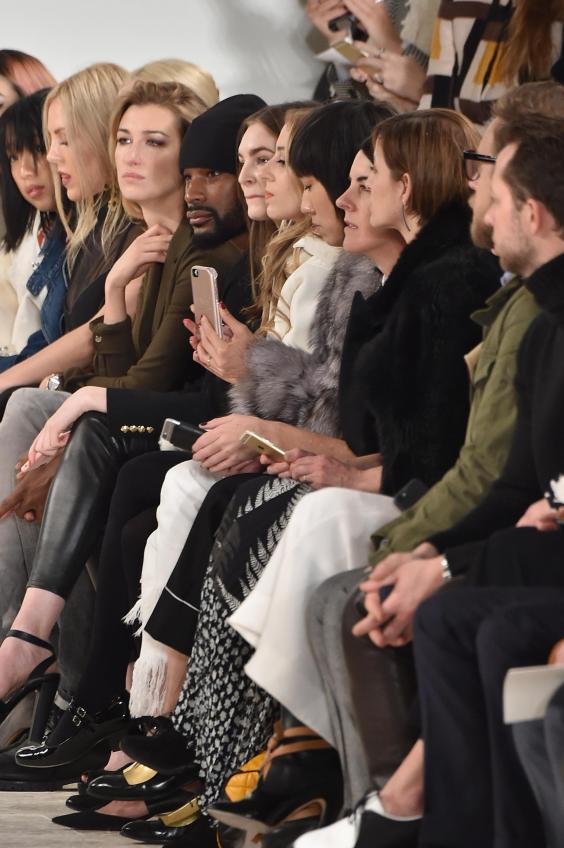 Indeed, given how well-documented the wares of Rousteing, Tisci et al are – on and off  Instagram – the discovery of new talent (read: new stuff to buy) via Instagram can feel special – and sometimes the journey starts right from the very beginning, as it did with Matteau Swim (12.7K followers), an Australian swimwear line by stylist Ilona Hamer. “We actually joined Instagram when we first started working on the label three and a half years ago,” Hamer says, “but we only placed a holding image there. It was August last year when we started posting our campaign images – to tease our launch – that the account really came to life. In the tease phase we were building a gallery of images that represented our brand and we’ve just grown from there. ‘Curate’ is a key word I go back to.” It’s that glimpse into a designer’s mind, as well as their stock cupboard, that makes Instagram so intriguing, turning a feed into a living mood board. The best designers aren’t just posting cold, hard product; they’re giving insights into their working methods, their mind-sets and the inspirations behind their work. Which in turn helps them to sell the stuff Given the rhetoric being thrown around by huge conglomerates about the importance of the “experiential” – generally meaning, for example, houses like Chanel taking a bunch of journalists on a jaunt to Havana for their 2017 Resort collection next month – it’s surprising more labels aren’t seizing on Instagram as an opportunity to tell a story, and seduce consumers. Especially when it reaches not just a few hundred press, or a few thousand magazine or newspaper readers but, potentially, millions – and most importantly, around the globe. (On a recent trip to Seoul, Stella McCartney invited 17 year-old Korean Jina Han and her 36,000 followers to share moments from the brand’s events on McCartney’s account.) That’s the pull of Instagram for Ruth Chapman, the co-founder of Matchesfashion.com – an established name, with a healthy quarter-million Instagram following. For her, it’s all about storytelling. So her posts include engaging captions and cutesie-poo emojis (a rainbow is a current favourite), as well as product numbers that enable users to accurately search for pieces on the site. And it turns out that an inspirational story can lead to as many checkout clicks as a covetable garment. “The more creative pieces are the most engaging ones,” says Chapman. “For example, if we show an image of a real woman and share her philosophies in a straightforward way, followers will engage with it much more strongly than with just a handbag.” She pauses. “Though handbags can gain high ‘likes’ too.” (Case in point: a Lanvin number bagged 1,572 ‘likes’ a few days ago.) Away from commerce, many designers also find Instagram a creatively energising way to unravel their processes. For Megan Trimble, the co-founder of London-based Zanzan Eyewear (25.1K followers), curating images has been a life-long passion, from tearing pictures out of magazines to a messy desktop of scanned files. “When apps like Pinterest and Instagram came along, it was a revolution to me. I could now share them with other people”, she says. But it also gives entry to a creative community not easily reachable. “When it caught on with the fashion world, it became a truly indispensable way of communicating our brand”, she continues. “We realised that more like-minded people were joining in the fun and it gave us direct access to them – other designers, editors, stylists, photographers. It broke down a lot of barriers that once stopped us from contacting people.” Source of Article :independent.co.uk Malaysia’s “Green Hijabs” Are Made From Recycled Plastic... Unbreakable: Things You Shouldn’t Do At Night For...